A new article on slum tourism has been published in ‘Annals of Tourism Research‘. It is titled ‘Responsible slum tourism: Egyptian Experience‘ and was written by dr. Moustafa A. Mekawy. This is one of the first publications dealing with the concept of slum tourism in an Egyptian context and therefore should prove an interesting read.

This paper aims to evaluate stakeholders’ views on the potential role that slum tourism and its associated products can play in enhancing living conditions in slums in Egypt. Empirical results were obtained using two quantitative surveys: one to investigate dwellers’ perceptions and a second to select appropriate pro-poor products based on stakeholders’ preferences. Findings show that inhabitants have positive attitudes toward the possibility of benefiting from slum tourism, but they differed in their ranking of the appropriateness of related pro-poor products. Based on findings, authorities should develop appropriate slum tourism products and typologies, as a planning threshold, to enhance living conditions of dwellers. A useful planning way of drawing ties between slum types and typologies is presented. 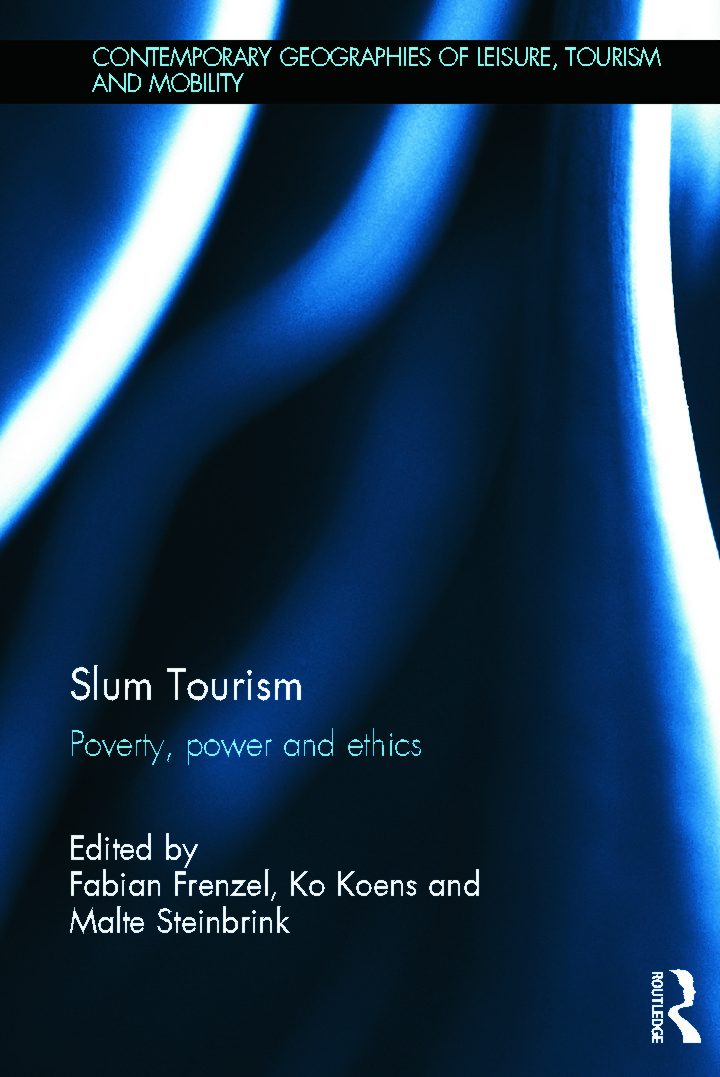 As mentioned in the previous post a new book slum tourism has recently been published with Routledge Pubilications. We are happy to announce that we can offer a 20% discount* on the  book to followers of slumtourism.net.

To order the copy with the discount code, simply quote SLUMTOUR12 when placing your order online.

Alternatively, you can print the Slum Tourism flyer (pdf, 1mb in size) and order the book by post.

Last week a new book on slum tourism was published by Routledge Publications. Edited by Fabian Frenzel, Ko Koens and Malte Steinbrink, it contains both theoretically oriented papers papers as well as more practical case study examples of slum tourism of seven different countries on four continent. In combination with the special issue of Tourism Geographies on slum tourism that was discussed earlier on slumtourism.net , the book provides a comprehensive overview of the current empirical, practical and theoretical knowledge on the subject.

Within the book a critical review of issues associated with slum tourism is provided, asking why slums are visited, whether they should be visited, how they are represented, who benefits and in what way? As such the work promises to offers new insights to tourism’s role in poverty alleviation and urban regeneration, power relations in contact zones and tourism’s cultural and political implications.

2. Wanting to Live with Common People? The Literary Evolution of Slumming

3. Beyond ‘Othering’ the Political Roots of Slum-Tourism

4. Slum Tourism: For the Poor by the Poor

6. ‘A Forgotten Place to Remember: Reflections on the Attempt to Turn a Favela into a Museum’

7. Tourism of Poverty: The Value of Being Poor in the Non-Governmental Order

8. Negotiating Poverty: The Interplay Between Dharavi’s Production and Consumption as a Tourist Destination

12. Poverty Tourism as Advocacy: A Case in Bangkok

The first ever special issue on Slum Tourism in an Academic Journal will soon be out. Volume 14  issue 2 of  “Tourism Geographies” will be titled “Global Perspectives on Slum Tourism” and is completely dedicated to the subject. It contains journal articles on the history of slum tourism, the current state of research in the field, the way it is represented and consumed as well as the ethical debates that continue to surround it. As a whole this is a very welcome addition to the little academic literature that is currently available and we would like to thank “Tourism Geographies” for taking this step to increase the knowledge on the subject.

Although the printed version of the special issue will not be out until May  2012, the articles can already be found and downloaded online. Although all articles will receive a separate post at a later time, below an overview and links to all the articles can be found below.

Update: The printed version of the special issue is out now.

In an earlier post I discussed a paper written by Evan Selinger, Kevin Outterson and Kyle Powys Whyte that was published by the Boston University of Law. The authors have published another paper on pvoerty tourism, this time focusing on the ethical question of poverty tourism and the difficulties surrounding consent.

They discuss whether it is morally permissible for financially privileged tourists to visit places for the purpose of experiencing where poor people live, work, and play? They discuss some of the pros and cons of poverty and slum tourism and conclude that tourists should only participate in poverty tours if there is a well-established collaborative and consensual process in place, akin to a “fair trade” process.  The findings are commendable and provide an opportunity for discussing how to establish what is fair and how often divided communities can benefit. Unfortunately they do not enter this discussion nor how tourists should be able to identify such fair trade processes beyond the establishment of fair-trade poverty tours.

Evan Selinger, Kevin Outterson and Kyle Powys Whyte published a paper last month titled “poverty tourism, justice and policy” in which they discuss whether poverty tourism should be subject to specific policy constraints based on moral grounds.

They look at this matter through favela tours in Rocinha, Brazil and garbage dump tours in Mazatlan, Mexico. In their conclusion they  argue that slum or poverty tours are a result of complex social relationships that require individual attention  and policy research.

In a former post regarding a television programme that involved famous people “living like locals” in the Nairobi slum Kibera for a week I wondered whether this could be a future face of tourism. It turns out a similar experience has  already been offered, albeit on a smaller scale.

It is discussed (briefly) in a recent article on domestic slum tourism in North America written by Amanda Grzyb. She gives an example of  a “48 hour street retreat” that was offered by a Yoga centre in Toronto. The retreat involved “going into the street without any money and live on the streets for several days… relying on the generosity of the streets to take care of us.”  Grzyb recognises this retreat as a form of tourism and discusses it in the context of  historical accounts of domestic poverty tourism in North America as well as manifestations of domestic slum tourism in the the current age. In the article she relates domestic slum tourism to societal class boundaries and concludes that “Domestic poverty  tourism  may  or  may  not  involve  varying  degrees  of  social  conscience, advocacy, and calls for reform, but it is, first and foremost, a commodification of experience that reinforces class boundaries”

The article is part of an academic roundtable discussion on the concept of “Homeless Chic” in the journal  “Expositions”. It can be downloaded from the “Expositions” website, or you can follow this direct link to the pdf of the article.

Bianca Freire-Medeiros recently published an article in the Journal fo Lain American Cultural studies regarding the  influence of the film City of God on the way tourists experience the favela (in this case Rocinha) in “real life”. She investigates how experiences are related back to idealised notions that have been taken from the cinematic favela of City of God and looks at the extent to which this gives further legitimacy to such images.

The article can be downloaded from Ingenta connect although unfortunately a subscription is required.

If you have recently seen or published a journal article, book or any other type of publication that involves slum tourism, please let us know so we can make others aware of it.

Janet Thorne recently wrote a professional report on her experiences of cultural tourism in the Gambia. Her findings suggest that these tours bear similarities to slum tours and, similarly to slum tours are promoted  with the promise of an insight into “the real Gambia” by certain tour operators and informal tour guides.

Thorne further shows how tourists on package holidays in this mass tourism destination certainly have an interest in such tours. What particularly surprised her on this matter was how similar the interests expressed by tourists in The Gambia were to those in the slum/poverty tourism literature. Among other things, tourists are hoping and expecting to see “everyday life” and have a more “authentic” tourist experience than is offered in general. Tourists are both intrigued as well as shocked by the poverty they see thus partially fulfilling this desire for authenticity.

While written as a more practical report rather than a purely academic work of tourism, the report contains much useful information on these cultural tours.  The finding that there is demand from for these kinds of tours among package tourists in the Gambia alone is interesting. The destination is mainly known for its Sun, Sea and Sand package tours where tourists come specifically to relax. Thorne goes further however and also discusses different forms of interaction between locals and tourists as well as difficulties of market access and local participation.

All in all this professional report brings up the important question of when cultural tourist activites can be categorised as poverty or slum tourism? This may be easy in the case of favela or township tourism as the practices are limited to certain geographical areas. However as Thorne shows, similar practices take place elsewhere as well under a label of cultural tourism.

The report can be downloaded here and those wishing to contact Janet can do so at janet_thorne@hotmail.com.

In an earlier post I mentioned how we are trying to get some sort of overview on where slum tourism takes place. Doing this, we found certain forms of slum tourism that are temporary in nature rather than permanent. 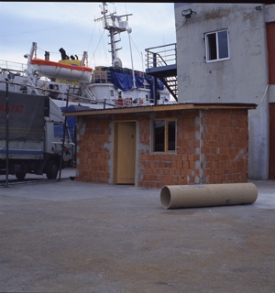 A good example of this can be found in the paper Gecekondu Chic by Derya Özkan, based on her PhD-thesis. She only discusses slum tourism briefly when she criticises the way in which it canturn poverty into a spectacle that can be aesteticised and consumed. However, particularly interesting  is her discussion of the Istanbul Bennial in 2003. Here informal housing (Gecekondu in Turkish) was used for an exhibited art project called “Ada”. A simulation gecekondu was built together with gecokondu builders from real life in the open in the backyard of the exhibition venue “Antrepo”. 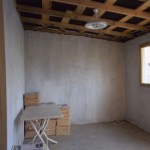 While the intention of the project was to highlight the production process of the gecekondu, it became a spectacle and was later criticised for aesthecisising the gecekondu and turning it into a cultural commmodity that can be consumed much in the same way as slum tourism in other places.

Although not intended as such, it would certainly seem that the Ada project created the first type of gecekondu tourism. I am not aware of more recent gecekondu tourism projects and/or gecekondu tours, but this example does show that temporal forms of slum tourism at least may be more common than we think.