We are deeply saddened by the untimely death of Douglas Ribeiro, a young Brazilian slum tourism researcher. Many people in this research network got to know Douglas at the second slum tourism network conference Destination Slum!2 in May in Potsdam. He presented his research on resident perceptions of favela tourism in his community Paraisopolis, Sao Paulo. Douglas, a researcher not just of the favela, but from the favela, deeply impressed the conference with his presentation and his personality. Remarkably, Douglas had crowd-funded his trip to Germany among friends and relatives. He died after a swimming pool accident in Mobile, Alabama, where he attended the World Leisure Congress.

Several members of the slum tourism network have expressed their sadness over Douglas’ death. We will post these condolences here to show our respect for this young man who inspired many in the network so deeply.

“Today, I am shocked and saddened to hear of the death of young, talented, and sweet Douglas Ribeiro. I met Douglas at Destination Slum! 2 in Berlin in May, and like many others, was inspired by his strength, intellect, tenacity, and absolute love for the world. Douglas came to present his research on perceptions of slum tourism from the residents’ perspective, something he knew a lot about as a resident of a favela in Sao Paolo himself. He crowdfunded his entire trip to Germany (his “first international experience,” as he repeated constantly with joy), as neither his school nor his family had the funds. Since we met, he wrote me energetically about how excited he was to travel to a conference in Alabama this month – his first trip to North America. Tragically, it was his last adventure, and his last chance to share his knowledge with the world. He was found unconscious in the hotel pool, and after fighting a coma for a week, he passed away yesterday, September 13. He was only twenty years old and had so much left to give to the world. I am thankful for the privilege of meeting him, and for his contributions to the field and his community. Douglas will live on through the lasting impressions he left for all those who knew him. My thoughts are with his vast network of friends and family who are feeling this immense loss.”

“Today I am terribly sad to hear of the passing of a wonderful young man, Douglas Ribeiro. I met Douglas at the Potsdam Slum Tourism Conference in May this year. A resident of one of São Paulo’s favelas, he was at the conference to tell the world about what it is like to have tourism in favelas from the perspective of people who live there. He explained that he had only managed to get to the conference because of the people back home who believed in him and had, thus, started an online crowd fund sourcing appeal. I was so impressed and inspired by his bravery and tenacity. One night after dinner we walked home together. He told me how happy he was to be in Germany. He fell in love with the country, he said, and loved the architecture and museums. He also told me about all the plans he had for this life and his wonderful family and how much hard work his mother did. He gave me a Brazilian real so I could always remember him – it is in my office where I see it every day. I only knew Douglas for 3 days, but in those three days he entered my heart. He was truly one of the sweetest most genuine people I have ever come across. Any help towards his family at this difficult time would be most appreciated. Rest in peace Douglas and thank you for inspiring me.” 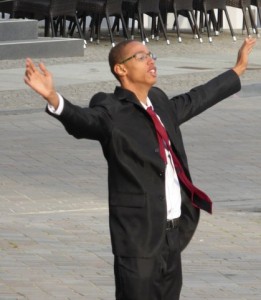 I feel deeply sad to hear about Douglas and want to share my sorrow with you and Douglas’s family.

We will miss Douglas’s deep, warm, social and enthusiasm commitment that we met at the second slum tourism network conference Destination Slum! 2 in Potsdam– and especially will remember from the conference tours in Berlin, in which I got the attached pictures of Douglas.

I give my deepest condolences to Douglas’s family.

I would like to express my sympathy after such big loss.

With all my regards. 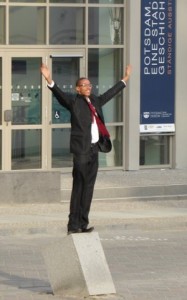 I am very sad to hear of Douglas’s death…

I met him only briefly on a walk during the conference, and we talked about the nerves of giving presentations. I did not realise he was so young and came from a poor background. I took him to be a postgrad from quite a prosperous family because,  I remember him immaculate in a suit. He was, as Emily says, a personable and enthusiastic young man who was an admirable addition to your Slum Tourism network. Please add my name to any message of tribute and condolence sent to his parents and family. 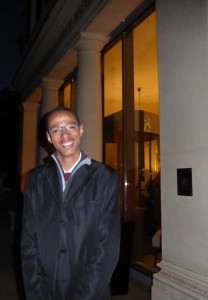 I cannot believe what you are telling us – I really would like to
completely be able to refuse to acknowledge this truth so it could not be true.

I’m sick of this new,
but I am grateful  you told us, despite the pain it drains and the indelible traces of  sadness.

My Douglas died.  He has been  “kidnapped”  by water, confused by his purity.
Premature absence to which we will have to learn to endure.

Only few days ago, he asked me when I was coming to visit him in Brazil,
I promised him it would be in my priorities for 2015 …

I am shocked.
Desperately sad and revolted against this misguided destiny …
The Prince of favelas
The one who has touched us so much.
First by its history of crowfunding ,
And by his shyness, which he opposed to his will to success.
He was very tall, by  size  and soul.

It’s a few of us which disapear,  a little of the innocence of this world.
He probably had the potential to be a leadeur  of the South in few years,
The voice of the people, of the « people of few»   who can change the world.

I’ll never forget you, my child, our hope.

I also met Douglas at the conference in Potsdam, and I had the honor to chair the session in which he presented his paper on the residents’ perception of Favela Tourism in Paraisopolis.

Ribero, it was wonderful that you were there! Thank you.

I am very sad and shocked to hear of Douglas’s death. We met at the Postdam conference and I think he left a huge impression on all of us. We had some very interesting conversations and I was really impressed by his passion, enthusiasm and positive outlook of the world. Doulgas, you will be missed. Rest in peace. My condolences to all of his family and friends.

I am deeply saddened by the news of Douglas’ untimely passing.  We met only briefly during the Destination Slum2! conference in Potsdam but it did not take long to realise he was a truly wonderful and inspiring individual.  We spoke about how he had managed to raise funds to attend the conference and share his knowledge and perspectives on slum tourism in the favelas.  We spoke of his dreams to continue his research and to experience more of the world.  His enthusiasm and excitement were almost tangible, and certainly contagious.
My heart goes out to his family and friends.

I’m terribly sad and still find it hard to believe that Douglas has passed away. He will leave a hole in my heart and for sure in many other people’s, too. I first met him, like the other participants, at the conference in Potsdam, where I had the chance to talk with him about his studies, his first foreign adventure and many other things. When it was time for me to return home, I invited him to stay at my place in Hamburg, if he would pass by there during his stay in Germany. I did not expect him to call me the next day saying he was on the way to visit me. We had a great time and long conversations every day. I was impressed by his immense curiosity, his courage and his mature thoughts on many matters. He seemed like a little brother to me and I was constantly looking at my mobile phone during work, anxious about him getting lost in the city. But he didn’t and so he spent some days with me and my girlfriend. On his last day in Hamburg we had a farewell picnic in a park close by. He enjoyed it a lot and we set up plans to visit him in São Paulo. When he was back in Brazil, he continued to keep me updated about what happened in his life. And there was a lot going on. He was very excited about going to Alabama, just another step on his way to where he chose his life to go to, I thought. And it is still unbelievable and painful that he won’t be able to go any further in this direction with all the potential he had. I will remember him walking down the streets with his green crocs and large suitcase, eager to know everything about every place. I will remember his great sense of humour, his overwhelming commitment to pursue his dreams and just for being a very, very special person.
I’m so grateful to have met you, Douglas. Be well, wherever you are!

When we First (and last) met last May I (knew) that we will stay in touch, meet again, and may be cooperate in future projects. But death seems way closer than what we feel, think, or expect.

May your soul rest in peace.
May we meet again, in a better place
May your death teach us about the reality of life

Same as how your life showed us the beauty within hardships, your death shall remark another turning point in our lives.

2 thoughts on “In Memory of Douglas Ribeiro”