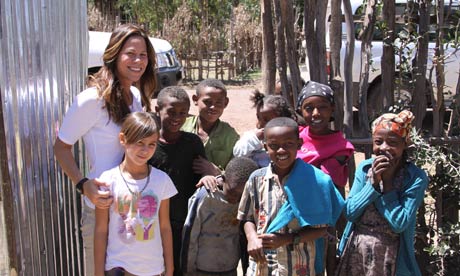 It would seem that a new addition can be made to the  the ever-expanding world of poverty and slum tourism. The following article in English newspaper the Guardian discusses package tours that are organised by NGOs and labels it as “Donor Tourism”.

It provides a discussion of the reasons why (international) NGOs seem to have started to actively use specialist travel agencies to organise group donor trips to poverty stricken areas. In the end they note  “development agencies realise that to build lasting connections between donors and their beneficiaries, increasingly the donor needs to get something back”.

This is an interesting observation as it suggests donors are more and more seen as clients that have a right to expect something back rather than supporting  relief organisations on a more intrinsic altruistic basis. The article also reflects on the worries of those working in emergency relief who in general appear to be unhappy with “Donor tourism”. A further critical discussion is given by Matt Muspratt on his Blog, where he highlights the dangers of such tours for further emphasising people’s gaze of Africa as that of a charity case. As Chimamanda Adichie so eloquently points out such a single narrative can create incomplete stereotypes of impoverished areas and rob people of dignity.

Given this critique, it will be interesting to see how “Donor Tourism” develops and to what extend it will establish itself as a new form of poverty or slum tourism.

In an earlier post I mentioned a television programme that placed celebrities in Kibera in Kenya. On the internet the programme has been criticised for portraying such a negative picture on the slums and some even use it as a way to criticise slum tourism in general.  One of my colleagues recently pointed towards one of the main problems of the programme, namely that it portrays Kibera using a single story of poverty. She then pointed me to this excellent presentation of Chimamanda Adichie regarding the dangers of such a single narrative.

The matters raised in the presentation are in my opinion very much related to the ethical debates surrounding slum tourism. The presentation and emphasising of a single story of poverty in slums has been used to criticise tours where tourists visit slums or impoverished areas. This criticism is often justified, in particular with tours where there is little or no contact between tourists and local people. On the other hand slum tourism can also serve to counter negative preconceptions of impoverished urban areas. It can help in showing the great amount of cultural and economic activities as well as diversity of life in these places. As such it can assist in giving people the opportunity to tell “their story” rather than what is shown in the media or have their stories told by others who have only been in these areas themselves a limited number of times.

Unfortunately, too many slum tours do not allow for respectful interaction with local people. Strict time schedules, itineraries and the language barrier make it difficult for tourists to have (meaningful) conversations with people other than the tour guide. Equally, tourists are sometimes more interested in getting “the picture” than listening or talking with others. This limits the experience both for the tourists as their hosts and means such slum tours tell a story of their own rather than that of the people they visit.