Tourist agency is an area of renewed interest in tourism studies. Reflecting on existing scholarship the paper identifies, develops and critically examines three main approaches to tourism agency, namely the Service-dominant logic, the performative turn, and tourist valorisation. Tourist valorisation is proposed as a useful approach to theorise the role of tourists in the making of destinations and more broadly to conceptualise the intentions, modalities and outcomes of tourist agency. The paper contributes to the structuring of current scholarship on tourist agency. Empirically it addresses a knowledge gap concerning the role of tourists in the development of Dharavi, Mumbai into a tourist destination.

A new study on township tourism in Namibia has been published by a team of researchers from Osnabrück University including Malte Steinbrink, Michael Buning, Martin Legant, Berenike Schauwinhold and Tore Süßenguth.

Guided sightseeing tours of the former township of Katutura have been offered in Windhoek since the mid-1990s. City tourism in the Namibian capital had thus become, at quite an early point in time, part of the trend towards utilising poor urban areas for purposes of tourism – a trend that set in at the beginning of the same decade. Frequently referred to as “slum tourism” or “poverty tourism”, the phenomenon of guided tours around places of poverty has not only been causing some media sensation and much public outrage since its emergence; in the past few years, it has developed into a vital field of scientific research, too. “Global Slumming” provides the grounds for a rethinking of the relationship between poverty and tourism in world society. This book is the outcome of a study project of the Institute of Geography at the School of Cultural Studies and Social Science of the University of Osnabrueck, Germany. It represents the first empirical case study on township tourism in Namibia.

It focuses on four aspects: 1. Emergence, development and (market) structure of township tourism in Windhoek 2. Expectations/imaginations, representations as well as perceptions of the township and its inhabitants from the tourist’s perspective 3. Perception and assessment of township tourism from the residents’ perspective 4. Local economic effects and the poverty-alleviating impact of township tourism The aim is to make an empirical contribution to the discussion around the tourism-poverty nexus and to an understanding of the global phenomenon of urban poverty tourism. 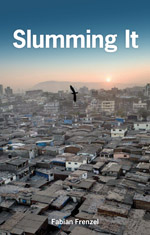 In the provocative Slumming It, Fabian Frenzel explores the intriguing motivations and consequences of this form of tourism with a truly accessible, open-minded approach. He examines the strange allure that slums have for wealthier visitors, and he investigates the changes this curious attraction has led to on both a small and large scale: from gentrification and urban policy reform to the organization of international development and poverty alleviation efforts. Using case studies throughout the global south—including Rio de Janeiro, Bangkok, and cities in South Africa, Kenya, and India—Frenzel provides a comprehensive study of slum tourism and a controversial take on the potentially positive impact it may have on these struggling communities in the future.

The book is based on a research project funded by the European Union Marie Curie Fellowship scheme. More publications and information can be found on the project website.

Read an extract from the book on CityMetric

Reviews:
Bianca Freire-Medeiros, author of Touring Poverty
“Based on years of embedded fieldwork, Frenzel’s book cuts through the powerful mythology surrounding the so-called slums, townships, and favelas as tourist attractions to construct a revelatory narrative of the relationship between poverty and tourism, exploitation and political activism.”

John Hutnyk, author of The Rumour of Calcutta
“The reality of the slum is much fought over in commentary. Frenzel cuts through the confusion to evaluate the valorisation of poverty in tourism. With examples ranging across India, Brazil, Europe and South Africa, Frenzel offers an analysis, both comparative and detailed, that is a theoretically-informed advance on current scholarship.”

Manfred Rolfes, University of Potsdam
“Frenzel has written a very inspiring book, that is full of ideas and also deeply political. He opens up many new perspectives on slum tourism, and highlights its local and global dimensions.”

Eveline Dürr, LMU Munich
“Rich empirical evidence, expertly interrogated by notions of place valorisation, make this a fascinating piece of cutting-edge research on a fast emerging field of study. It makes a significant contribution to the available literature and is key reading for professionals and scholars alike.”

Christian M. Rogerson, University of Johannesburg
“A bold and carefully crafted analysis of slums and slum tourism. Theoretically grounded in the concepts of tourist valorization and local value regimes, it offers a nuanced and state of the art understanding of the nexus of tourism, slums and poverty.”

Imogen Tyler, author of Revolting Subjects
“This provocative and beautifully written study of slum tourism will transform your assumptions about the politics of slumming it. Drawing on rich ethnographic data, Frenzel carefully considers the activist potential of tourism to enact a relational politics of solidarity and care.”

development of small tourism businesses has been seen by policy-makers as a valuable means of alleviating poverty in South African townships.  This perspective has  also been endorsed by several “responsible” tourism businesses and academics.

After close investigation of township tourism practices and  micro-entrepreneurship in South Africa, Ko Koens and Rhodri Thomas, however, argue that this may not necessarily be the case. In their article “You know that’s a rip-off”: policies and practices surrounding micro-enterprises and poverty alleviation in South African township tourism, they identified several barriers that prevent township residents from successfully developing their businesses and sharing in the material gains available through tourism, even when visitor numbers are significant.

These findings suggests a need to critically reconsider current policies in favour of greater regulation and alternative forms of investment as well as a need to reassess the value of advocating responsible tourism to consumers who are often unable to gain full understanding of the context they visit or the implications of their choices.

For a short time you can download the article on the website of the Journal of Sustainable  Tourism for free.

After the second Slum Tourism Network conference in Potsdam in May 2014 several of the papers have now been published in a themed issue in the journal Tourism Review International Volume 18, Number 4. The second part of the themed issue will be published in summer 2015. 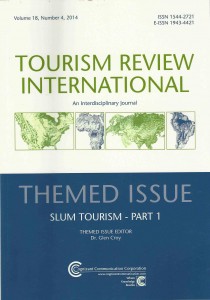 Here is the table of content of Part 1. Find the abstracts here.

Reimagining the Geography of the Favelas: Pacification, Tourism, and Transformation in Complexo Do Alemão, Rio de Janeiro 269
Emily LeBaron

Prior to this themed issue a special issue in the German Zeitschrift für Tourismuswissenschaft was published in late 2014 with several papers from the conference.

Ko Koens and Rhodri Thomas recently published an article on the contribution of small businesses in township tourism to economic development. Their discussion highlights the complexity of slum touris as they reveal tensions between different actors involved in township tourism. While the involvement of small, locally owned, businesses is beneficial, it is limited by conflicts of interest, lack of trust, limited social networks and little attachment to the township locality.

The article can be downloaded by clicking here:

Yesterday a new book on slum tourism by one of the leading scholars of the subject, Bianca Freire-Medeiros was published. The book called “Touring Poverty” focuses on tourism in Rocinha, the most famous slum tourism destination in Latin America. It is a striking account and certainly a worthy read. You can find more information in the press release below

Touring Poverty addresses a highly controversial practice: the transformation of impoverished neighborhoods into valued attractions for international tourists. In the megacities of the global South, selected and idealized aspects of poverty are being turned into a tourist commodity for consumption.

The book takes the reader on a journey through Rocinha, a neighbourhood in Rio de Janeiro which is advertised as “the largest favela in Latin America.” Bianca Freire-Medeiros presents interviews with tour operators, guides, tourists and dwellers to explore the vital questions raised by this kind of tourism. How and why do diverse social actors and institutions orchestrate, perform and consume touristic poverty? In the context of globalization and neoliberalism, what are the politics of selling and buying the social experience of cities, cultures and peoples?

With a full and sensitive exploration of the ethical debates surrounding the ‘saleof emotions’ elicited by the fi rst-hand contemplation of poverty, Touring Poverty is an innovative book that provokes the reader to think about the role played by tourism—and our role as tourists—within a context of growing poverty. It will be of interest to students of sociology, anthropology, ethnography and methodology, urban studies, tourism studies, mobility studies, development studies, politics and international relations.

Bianca Freire-Medeiros is Senior Lecturer in Sociology at the Center for Research and Documentation on Brazilian Contemporary History (CPDOC) at the Getulio Vargas Foundation in Rio de Janeiro, Brazil. She was a Research Fellow at the Center for Mobilities Research (CeMoRe) at Lancaster University.

recent article by Fabian Frenzel and Ko Koens titled “Slum Tourism: Developments in a Young Field of Interdisciplinary Tourism Research” can now be downloaded for free from the publisher’s website. It provides a short overview of current central themes in the literature on the subject and sets out a short research agenda. As such it is both a useful introduction for researchers that are new to the subject, as well as those that want to reacquaint themselves with subject to do new research in the future.

It is not certain how long this articel will remain open access, so it may be useful to download it soon!

This paper introduces the Special Issue on slum tourism with a reflection on the state of the art on this new area of tourism research. After a review of the literature we discuss the breadth of research that was presented at the conference ‘Destination Slum’, the first international conference on slum tourism. Identifying various dimensions, as well as similarities and differences, in slum tourism in different parts of the world, we contest that slum tourism has evolved from being practised at only a limited number of places into a truly global phenomenon which now is performed on five continents. Equally the variety of services and ways in which tourists visit the slums has increased.

The widening scope and diversity of slum tourism is clearly reflected in the variety of papers presented at the conference and in this Special Issue. Whilst academic discussion on the theme is evolving rapidly, slum tourism is still a relatively young area of research. Most papers at the conference and, indeed, most slum tourism research as a whole appears to remain focused on understanding issues of representation, often concentrating on a reflection of slum tourists rather than tourism. Aspects, such as the position of local people, remain underexposed as well as empirical work on the actual practice of slum tourism. To address these issues, we set out a research agenda in the final part of the article with potential avenues for future research to further the knowledge on slum tourism.

While slum tourism generally is not associated with Central America, Eveline Duerr describes in her article Urban Poverty, Spatial Representation and Mobility: Touring a Slum in Mexico how in Mazatlán, Mexico a multidenominational church offers regular tours to the city’s garbage dump. She looks at different modes of (im)mobiilties and the implications this has for people and places and describesteh ambigious effects of integrating marginalised places into the urban representation.

The popularity of slum tourism in academic journals continues to increase.Here are two new ones:

The ethics of slum tourism in India are revisited by Deepak Chhabra and Akshat Chowdhury in their article titled Slum Tourism: Ethical or Voyeuristic? They note how slum tourism constitutes complex production process strives to provide both meaningful and profitable tourist gazes, although heavy traces of voyeurism can be found.